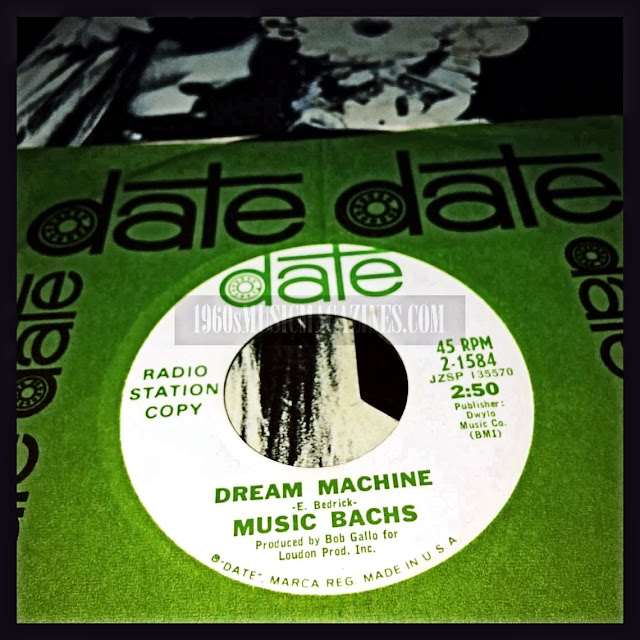 Long Island, NY group Music Bachs were a popular outfit in the own locale but seemingly didn't make any waves further field leaving just two singles on Date behind. At first I thought they could have been simply a studio group cobbled together by the label in the hope of a hit record. This is not true of course.

My reference books and guides contained no Music Bach's information but after some digging on the internet and Facebook I managed to track down some decent information and rare photographs. So it's very much a big thank you to Linda Miller Lemons (if you ever read this - fab photos) and Jonas Carlsson who proved to be the perfect sleuth.

Music Bachs started their existence as The Trolls during the 1964/65 period of the British Invasion and were a suited and booted group playing local venues. It seems that most of the line-up remained intact when times started getting a little freakier and psychedelic. This is probably the reason behind the name change, new image and way-out music.

"Dream Machine" sounds like a psychedelic Lovin' Spoonful with it's use of trippy studio FX such as the closing reverse tape fade-out, soft layered lanquid vocals and dreamy atmosphere. The other side "Dig Yourself" is also Lovin' Spoonful influenced (at least to my senses) and has a brisk tempo and more upfront compact organ. The record was produced by the famed Bob Gallo who worked with mostly soul groups.

A follow up single emerged in March 1968. I don't have this disc but have heard "Life And Death" via a CD compilation called "Soft Sounds For Gentle People" Volume 3.

Music Bachs member Marcel Thompsen ended up in Mr Flood's Party who released an album on Cotillion in 1969.