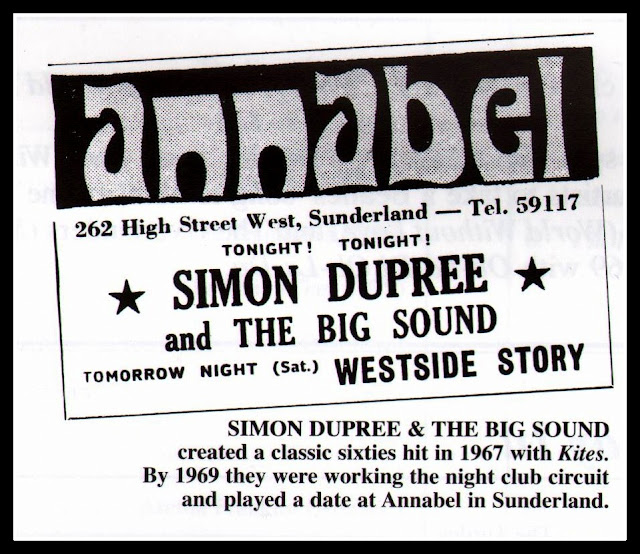 Annabel's Night Club in Sunderland was still open in the 1980s. Never went inside though, it was where the 'heed-the-balls' went. The building has since been demolished.
Back in 1969 the place was the venue for Simon Dupree & the Big Sound. 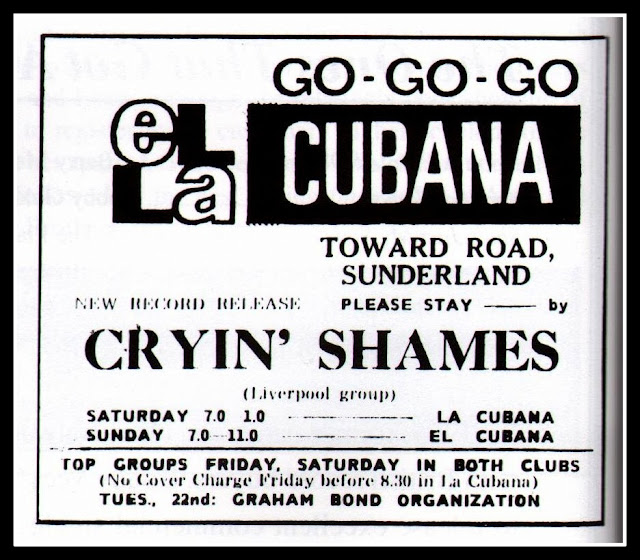 Here's a 1966 gig advert for The Cryin' Shames playing at La Cubana situated in Toward Road, Sunderland. I've walked up that road so many times but had no idea there once was a "Go-Go-Go" Club. Next week it would host The Graham Bond Organization.

Back to The Cryin' Shames and their freakbeat single "Come On Back" - I wonder what the Mackem's made of this.. 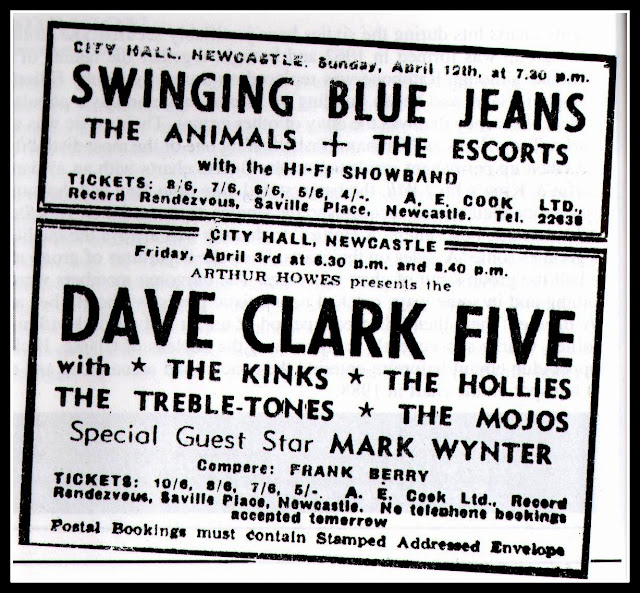 Beat and R&B groups at the City Hall, Newcastle during April 1964. If only I had been born and was in my late teens I would have been in that zone.

I was wondering if they were The Trebletones who released a single on Oriole in June 1963. I checked this out the other day funnily enough cos I was curious. The single was "In Real Life" / "Dream Of A Lifetime"

The Hi-Fi Showband could be the Scottish band (aka Danny and the Hi-Fi Combo) who later in '66 released one single on Alp as The Hi-Fis... ('It's Gonna Be Morning')... and of which the Thanes recorded a version of the flipside 'I Wanna Hear You Say Yeah'! Not to be confused with the Parlophon-ic Hi-Fis... of 'Tread Softly For the Sleepers' infamy! (Lenny) 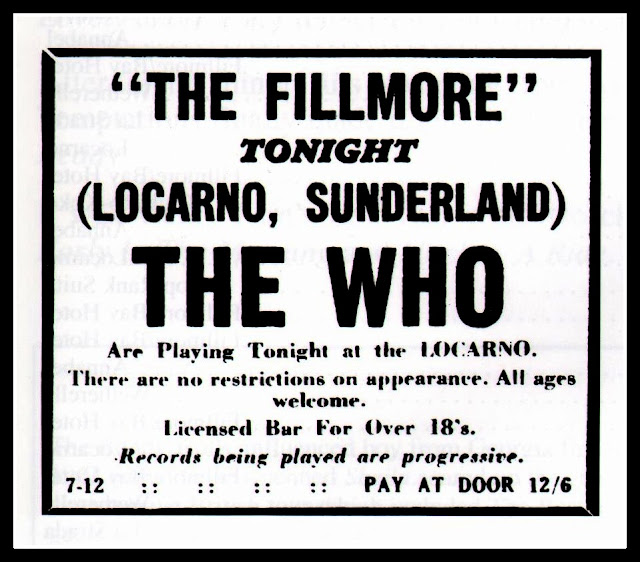 The Who at the "Locarno" in Sunderland, 1969. The North-East "Fillmore"
"Records being played are progressive" 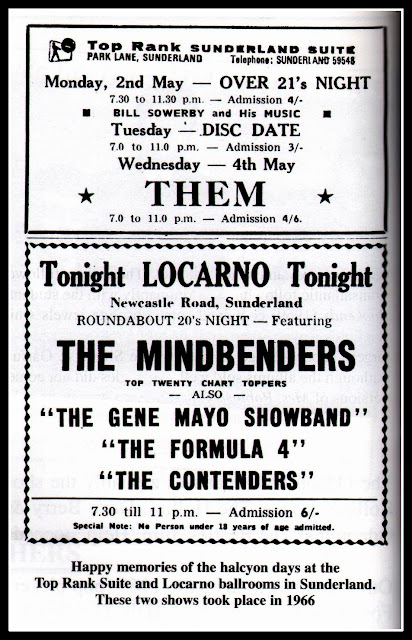 Sunderland welcome Them and The Mindbenders at two separate venues in 1966. The Top Rank Suite, Park Lane closed in the 80s and was made into a Super Store, called "Food Giant" I believe. Long gone now though, pulled down...
The Locarno Ballroom on Newcastle Road changed it's name to the "Mecca" sometime in the 70s.. I remember it being called "The Mayfair"...used to go here in the 80s...
Also long gone! 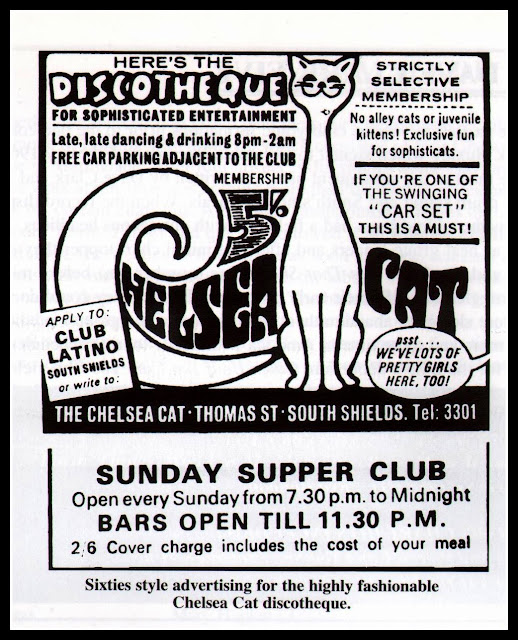 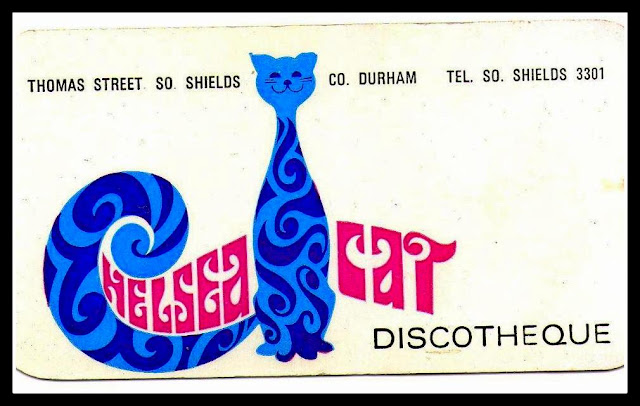 A few miles down the road from Sunderland and you'll arrive at South Shields. The hip place to be in the 1960s appears to have been "The Chelsea Cat" Back in the 60s it was a "Strictly Selective Membership" - "No alley cats or juvenile kittens." By the mid 1980s, when I went a few times they were letting anyone who looked old enough in. 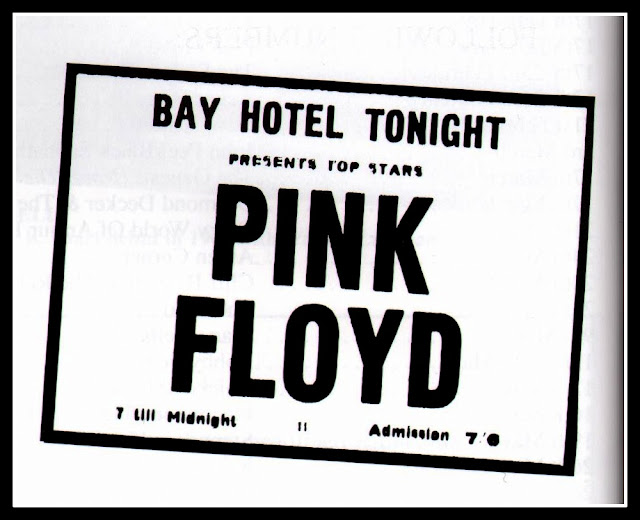 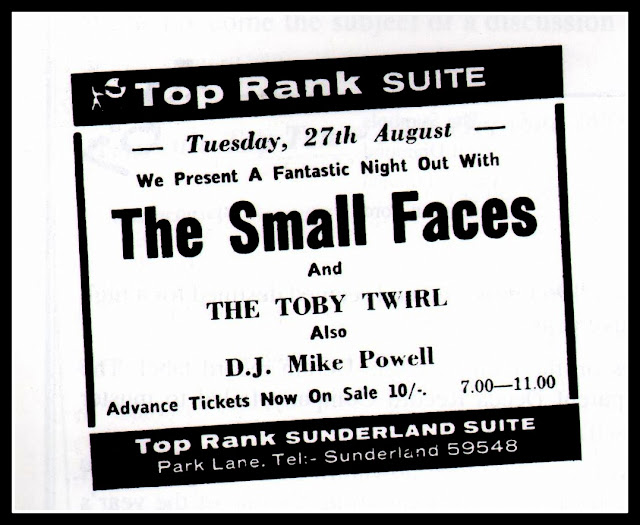 The Small Faces at the "Top Rank" in Park Lane, Sunderland...August, 1968.
Support from Newcastle based psychedelic pop group The Toby Twirl. You may remember their non hit wonder "Toffee Apple Sunday" 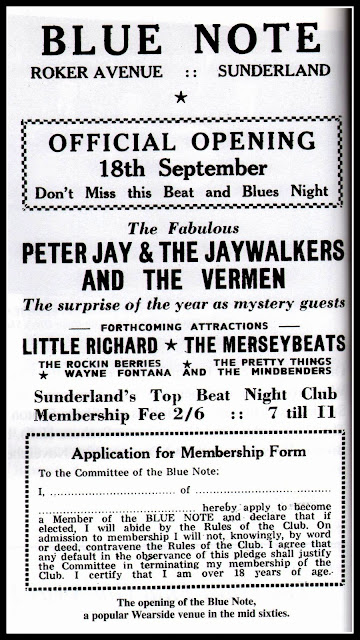 At the "Blue Note" in Roker Avenue, Sunderland it's a Beat, Beat, Beat 1964 world with Peter Jay & the Jaywalkers and The Vermen. Never heard of the latter before, perhaps a local group.
Up coming gigs include Little Richard, The Rockin' Berries, Wayne Fontana & the Mindbenders, The Merseybeats and The Pretty Things...
1960s North East Music Venues