THE SEEDS - THE WIND BLOWS YOUR HAIR 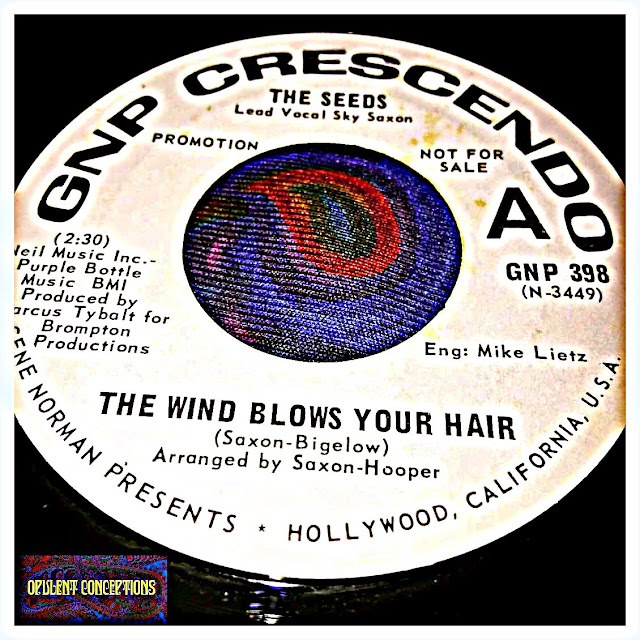 The Seeds are no strangers to my music blog and various singles have been written about over the years. This week I was fortunate enough to find a copy of their 1967 flop "The Wind Blows Your Hair" which has eluded me for years. It rarely turns up for sale so when it does you gotta strike fast.

A full and descriptive post about this particular Seeds classic was posted on http://www.skysaxonseeds.com/


"The Wind Blows Your Hair" is a scintillating and spooky 1967 psychedelic non-album single by The Seeds, and it is the best song they achieved.

"The Wind Blows Your Hair" achieves its odd and unsettling feel by mixing upbeat lyrics about a wedding celebration with a snaky, descending keyboard riff (and Sky Saxon's provocative vocals) that gives the merry tale a darker and queasier aspect. This is partially explained by the fact that it's original lyrics were also dark — a sneering put-down in the vein of 1965-era Dylan, with "Prince Satan" in a starring role.

Recording of the song was attempted four separate times by The Seeds. The first was during a January 1966 session, and the other three times were during 1967. For the latter two sessions, "The Wind Blows Your Hair" had its lyrics re-written (from Satan to wedding), and the sessions were booked specifically to record this song as a single.

Three separate recordings have been released officially: the original GNP Crescendo single from October 1967 (with the wedding lyrics), and two of the Satan versions — the January 1966 run-through and a mid-1967 take (in both mono and stereo mixes).

The recording history of "The Wind Blows Your Hair"

The song was first recorded in January 1966 at a session in which The Seeds also recorded both sides to the "Try To Understand" b/w "The Other Place" single. This version has a sparser and slower arrangement, though the basic structure is already present. It is a remarkable recording for January 1966, convincingly psychedelic and audaciously eerie. And there's the prominent appearance of "Crown Satan, Prince Satan again!" (This "version 1" is available on the Big Beat 2013 expanded CD reissue of A Web Of Sound as a bonus track.)

On May 12, 1967, during sessions for Future, The Seeds revived "The Wind Blows Your Hair", at a faster tempo and with more ambitious instrumentation, but with the original Satan lyrics. Sky Saxon double-tracked his vocals. There was only one take, first released in 1977 on the Fallin' Off The Edge rarities LP (misleadingly titled "The Wind Blows Your Hair (reprise)" with a mono mix released for the first time in 2013 on the Big Beat expanded reissue of Future, identified as "version 2".

The May 1967 take of "The Wind Blows Your Hair" was considered and then rejected for the Future album, but after the album's release, The Seeds entered the studio twice more in mid-1967 for two more attempts at the song. Sky rewrote the lyrics, but the music remained mostly the same. The take that was deemed best was released in October 1967, with the head spinning "Six Dreams" from Future as it's B-side: one of the most satisfyingly psychedelic singles ever released.

It is this most-famous version of "The Wind Blows Your Hair" that can be found most readily on several different compilations, as well as the original GNP vinyl single. 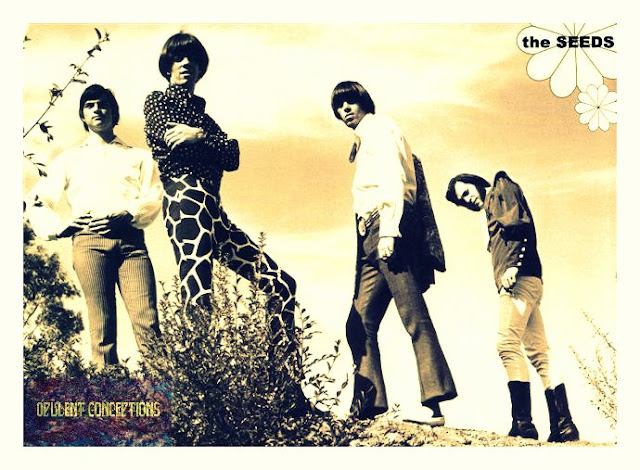