THE SCOTT BEDFORD FOUR - YOU TURNED YOUR BACK ON ME 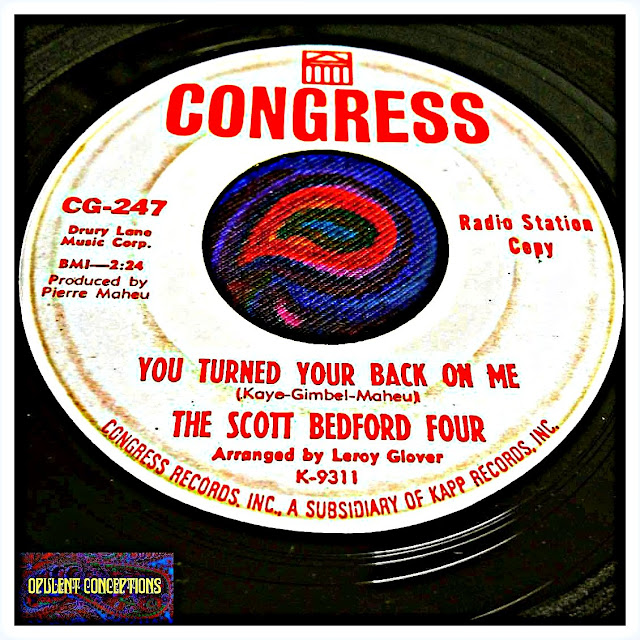 I've had this great record for several years but somehow never got around to posting it on my blog and doing some research. That all changed the other day when I was in one of my many boxes filing away my Seeds 45.... I flicked onto this disc by The Scott Bedford Four.

Incredibly, "You Turned Your Back On Me" has only appeared on one compilation, that being "Kicks And Chicks" on Eleventh Hour way back in 1990. That in itself is not the easiest album to locate and never was, even back in the day.

According to 'Teenbeat Mayhem' The Scott Bedford Four hailed from Northampton, PA. Prior to recording for their first label Joy Records they had been known as The Corvairs.
Today's disc under spotlight is their only release on Congress so I'll just concentrate on this one.

"You Turned Your Back On Me" is a scintillating beat pounder with a tough approach and aided by ringing 12 string guitars, cool background vocals, a fierce lead break with an ace harmonica burst. This song simply jumps outta my speakers, it's mastered so loud. The disc was a 'Chart Spotlight' in Billboard during August 1965 but no success became of this fabulous slab of vinyl.

I hadn't realised this until today but The Scott Bedford Four left Congress after this release and signed to Philips, changing their name to The Elusives then released "You Won't Find Better Than Me" / "Lost Love" in September 1966.