THE DILLONS - SIMPLE WAY OF LIVING 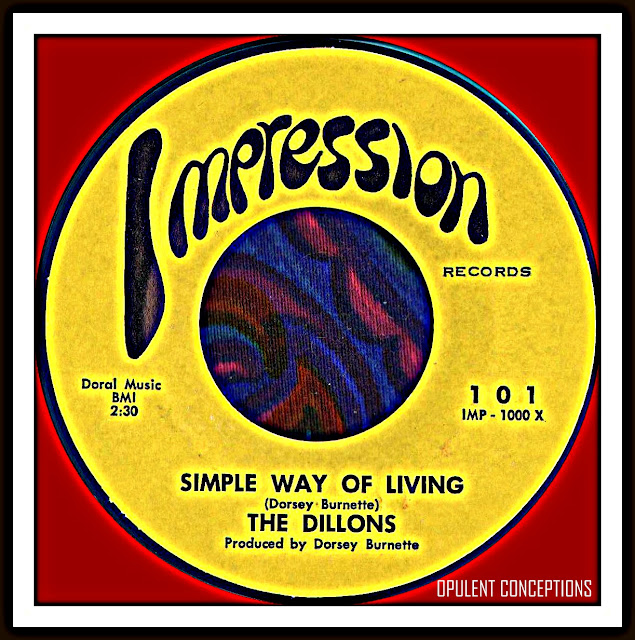 Not a lot is known about The Dillons but in my educated view I suspect that they were from California. TV footage of them does exist and is on YouTube, here they perform "Simple Way Of Living" on the "Shivaree" music show. Interestingly, they are a rather square looking duo. I was expecting a four piece folk-rock group in Sunset Strip threads with bowl haircuts.

Perhaps they were a studio concoction to cash in on the Los Angeles folk-rock sound, even adopting a group name similar to 'Dylan'. Whatever The Dillons intentions "Simple Way Of Living" is a knock-out tune and deserves wider recognition.

The song was written and produced by Dorsey Burnette who captures the 'sound' of the times perfectly. If 12 string merseybeat folk janglers are your bag you're sure gonna dig "Simple Way Of Living." The other side "Night Winds" sounds like it's from another era, it's OK but not really my scene.


According to an online source The Dillons performed two songs on "Shivaree", the other cut was "Great Shakin' Fever" which may have been recorded but was presumably was left in the can when this single went to nowheresville because after their one stab at fame The Dillons were no more.

Other noteworthy singles on the Impression label include those by The Tangents, The Dirty Shames and Lonnie & the Legends.