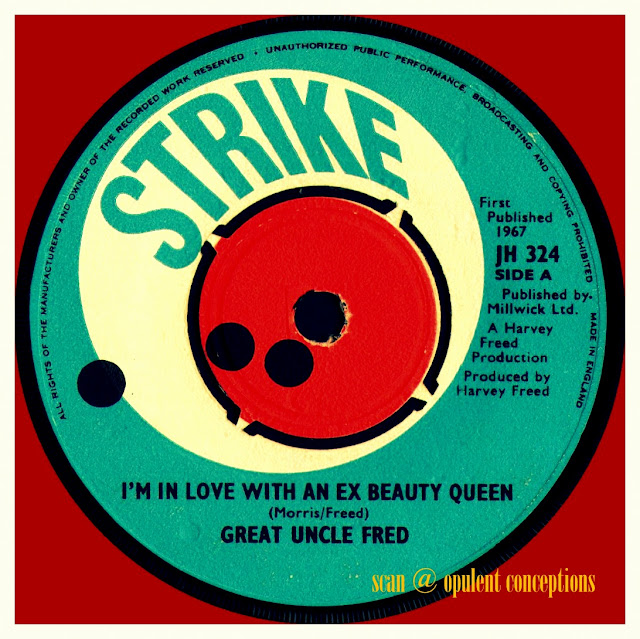 The oddly named and obscure group Great Uncle Fred are believed to have their origins in Great Yarmouth and the small East Anglian beat scene. At that particular period they were calling themselves The Millionaires.

Sometime in 1966 a decision was made to turn professional and relocate to London for a shot at the big time. Sadly, all that came from their endeavours was this lone single on Strike. It's gotta be said that the Strike label design is one of mod beauty.

In London they changed their name to Great Uncle Fred and recorded a Harvey Freed pop art number "I'm In Love With An Ex Beauty Queen" which by all accounts almost made the Top 40 in the Disc & Music Echo Chart during February 1967.

"I'm In Love With An Ex Beauty Queen" is an odd little number combining a mod beat with a Russian style sound. Very Cossack au go go. It sounded different and unique enough to be a hit. Shame then that this one shot at stardom was Great Uncle Fred's last.
The single was compiled in the 90s on the vinyl only compilation "Incredible Sound Show Stories - Volume 14" also known as "Candy Coloured Dreams."

The B-Side is an instrumental of the same song but with a slightly different mix, some echo and a louder guitar part.

a source of information about the East Anglian beat scene can be found here.