CHILDREN OF THE MUSHROOM - YOU CAN'T ERASE A MIRROR 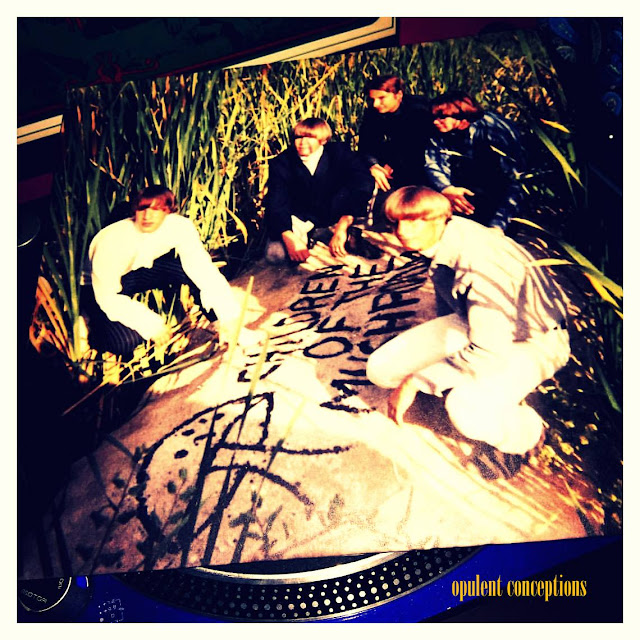 This psychedelic group from Thousand Oaks, CA only released one single during their brief existence, the double sided acid jewel "You Can't Erase A Mirror" / "August Mademoiselle" (Soho Records) released late 1967 or early 1968. 'Teenbeat Mayhem" suggests a December 1967 release.
The back of the LP liners state both songs were recorded at Nashville West, Hollywood in 1968.

The single has become one of the most sought after late 60s psychedelic slabs of vinyl, expect to pay in the region of $400 for a copy if one ever shows up for sale. About six or seven years ago I placed a bid for a copy on eBay and was decimated. From memory I think I bid around $300 but it eventually sold for way above that!

"You Can't Erase A Mirror" and "August Mademoiselle" are simply wonderful, both songs are full of mystique, hauntingly trippy and with fuzz. I would have loved a legitimate re-issue of the single on 45 r.p.m. but I'll certainly make do with this retrospection on Outsider Music.

Also included are previously unreleased recordings from a garage in Thousand Oaks and in a living room using a hand held reel to reel. None of the other songs are essential but I'm happy to listen to them anyway. They all are a lot heavier in sound mixing Doors moves with Cream style vocals especially on "Blade" The longer piece and mostly instrumental "Exordium (The Mushroom Theme)" is lo-fi but high quality. No doubt this would have sounded fabulous as a studio recording.

Children Of The Mushroom