THE HIGHER STATE - (CONSIDER IT) A DEBT REPAID 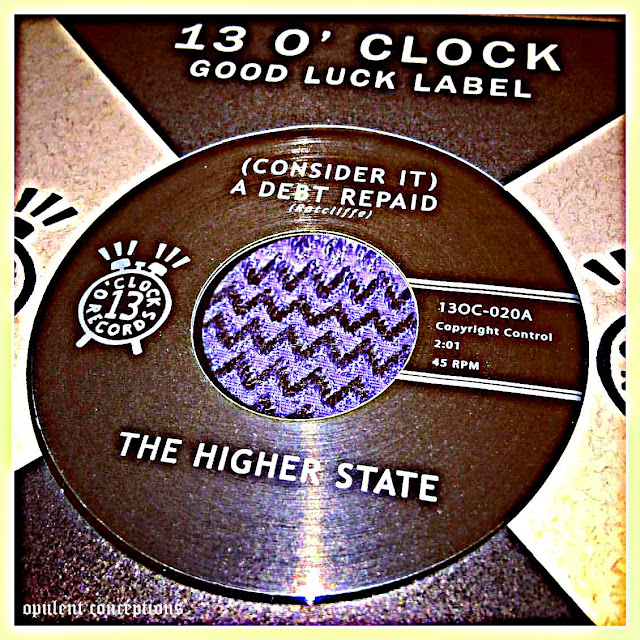 Last year The Higher State lost two long time members when drummer Mole and guitarist Daniel Shaw left the band for personal reasons. This came as a major surprise to me and I don't think it's been that well documented online as the remaining members Marty Ratcliffe and Paul Messis don't really do the social media thing.

I must admit that I was in a 'state' of worry when I heard the news. Would one of my favourite contemporary groups decide to just call it quits and move on to other projects? As you probably know, Paul has his own small record label and solo career.

Thankfully my fears were short lived when I received emails from both Paul and Marty letting me know that they did intend to carry on and would release discs in the future but would probably remain a studio based outfit. The first fruits of their partnership is this fantastic twin spin on the highly collectable 13 O'Clock Records and it's a record I highly recommend that you add to your collection.

Both sides have thee purist "State" sound we've come to expect but this time the emphasis is on a Texas '66 garage sound. They've also added some moody organ thrills into the mix of jangle, fuzz and charm. "(Consider It) A Debt Repaid" written by Marty, is a beautiful garage noise. It's so easy to inject your mind with The Higher State's treble-tone guitar soundscapes when they sound as sweet as this.

The other side "In A World That Just Don't Care" is a typical Paul Messis song. His lyrics are forever introspective, which is his great strength. Check out this verse and you'll soon be on his trip. This cut somehow reminds me of Thursday's Children's "You Can Forget About That"

"The roll of the die
Won't help you reach paradise.
The light it will shine
And burn in your open eyes.

Both sides of the disc were recorded at 'Mom's Landin'
It's an RPM production and mastered by Tim Warren at Crypt.

Get your Higher State single here before it's too late.