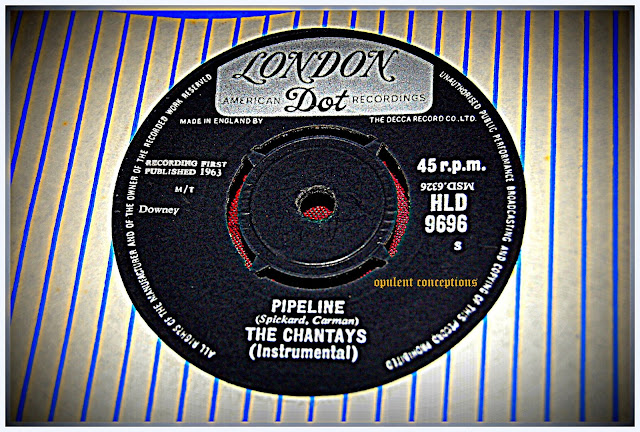 Here's one of the all time great surf instrumentals, who doesn't know "Pipeline" I'm guessing not many, so much so that I'm not even gonna bother uploading the tune for inspection. Head off to YouTube and watch The Chantays mime this greatness on The Lawrence Welk Show in May 1963.

The record was released on the London label in Britain during March 1963 and got as high as #16 on the Chart. The vital Dot logo is present and correct. "Pipeline" was released in America on Dot Records at the start of 1963, but before Dot picked it up for national release it came out on the small Downey label some months earlier.

When surf music became last years news The Chantays changed their name to The Leaping Ferns before adopting the moniker The Ill Winds for a couple of 45s on Reprise and started recording in the in-vogue 1965 folk-rock style. Those records will be covered here later.
Chantays Dot Ill Winds Leaping Ferns London