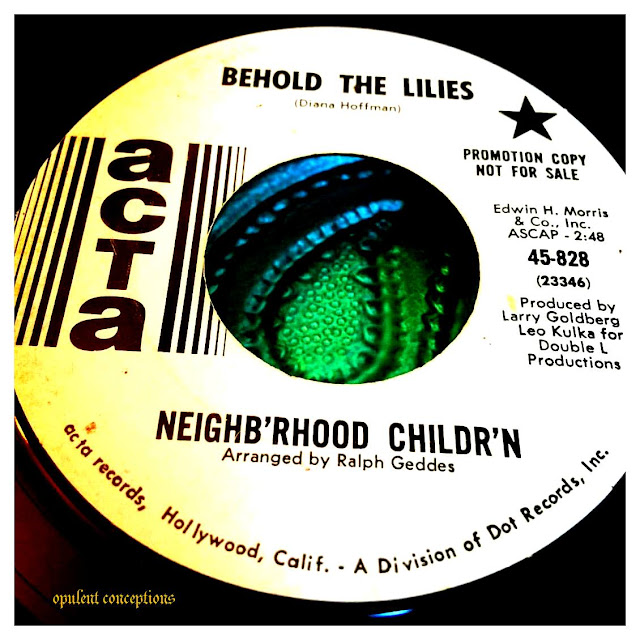 I remember way back in the mid 80s buying a bootleg copy of The Neighb'rhood Childr'n's album and being totally knocked out by the mesmerizing psychedelia. It sounded like nothing I'd ever heard before merging Jefferson Airplane vibes with tripped-out Seeds like compact organ bursts.

Fast forward nearly thirty years later and I'm buying my first Neighb'rhood Childr'n 45, which no doubt will lead me on into collecting all of their single releases.

The Neighb'rhood Childr'n were based in San Francisco during the mid to late 60s and played many gigs supporting the major players with perhaps their biggest gig being an opening slot with The Who & Iron Butterfly at the Sacramento Civic Auditorium.

So what about this particular 45 under the spotlight? Both are non-LP with the flip 'I Want Action' being a departure in their sound with soul influence using brass. Not my cuppa tea.
Way superior is the top side 'Behold The Lilies' which is summery baroque psych with orchestration and is unsurprisingly just what the title suggests......viewing colourful lily flowers growing in a field..

'Behold The Lilies' was written by singer/organist Dyan Hoffman although the label states her forename as Diana (possibly a misspelling).