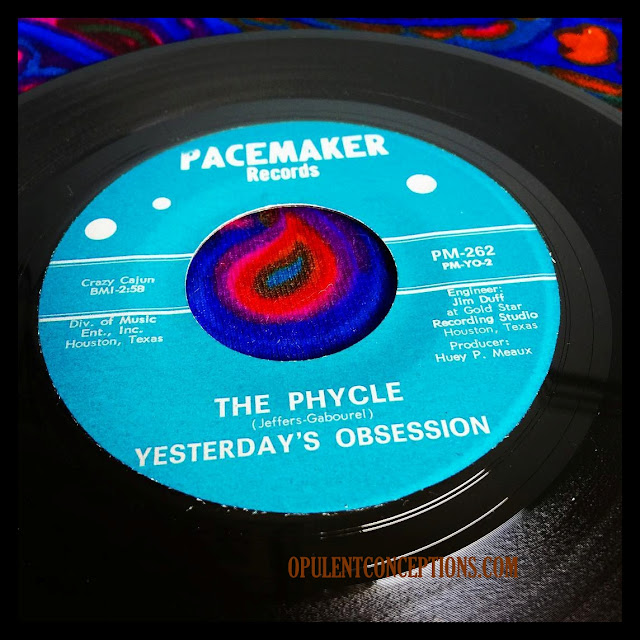 Fuzztoned psychedelia by Yesterday's Obsession, a band I've not read about that much despite 'The Phycle' appearing on at least four different compilations. The person who sold me this 45 suggested that the band were a group of high school kids from Port Arthur, Texas.
Port Arthur is not too far away from Houston, Texas...where Pacemaker Records were based....so that may be true, but if anyone knows accurate details please get in touch.

'The Phycle' is doomy psychedelia with eerie organ in the background, loud bass and fuzz. It's a strange title and words 'the phycle' is never mentioned in the song?! Maybe the title should have been 'The Psycle' but someone spelt in wrong when designing the label and the 'mistake' was only spotted after the records had been pressed?

'Complicated Mind' is less popular with the compilers. Don't know why because it's a great tune, heavy on tambourine and maracas.

The songs were recorded at the famous Gold Star Studios and produced by Huey P. Meaux. I've checked my database and he also worked with Gaylan Ladd and The Sir Douglas Quintet as well as many soul acts I'm not bothered about.