SUMPIN' ELSE - I Can't Get Through To You 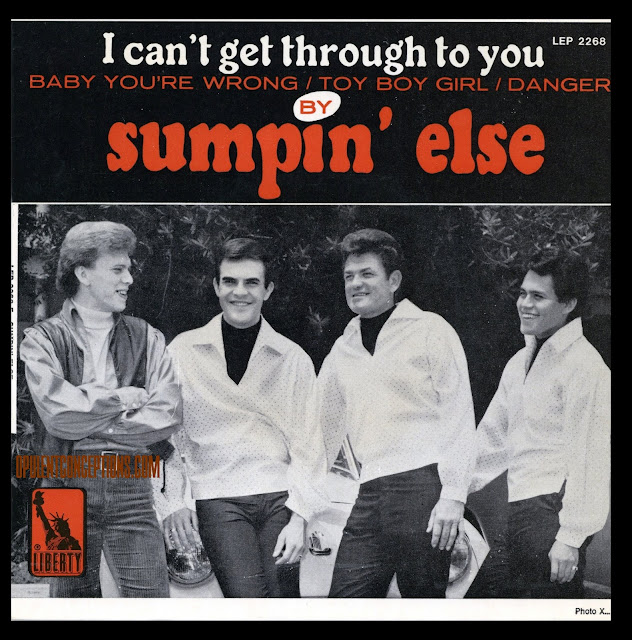 Sumpin' Else were a short lived band from Los Angeles who strangely had a four song EP in picture sleeve released in France. The band in this pic have square dude haircuts and that mid 1965 co-ordinated look popular with bands at the time before some of that Sunset Strip rebellion set in and bands began to dress a little more freaky.

Sumpin' Else have that well produced L.A. sound coming across like The Standells. 'Baby You're Wrong' has got some prominent fuzz base lines and was compiled on Vile Vinyl back in the 80s. 'I Can't Get Through To You' has also got fuzz action and some killer lead guitar.

'Toy Boy Girl' is more poppy than the previous songs and 'Danger' uses fuzz again. All of these four songs were written by John Merrill. I've done some digging through liner notes etc but can't figure out if this is the same person who played guitar and wrote songs in The Peanut Butter Conspiracy??

Sumpin' Else had another release on Liberty Records 55900 recording 'You're Bad' written by the Addrisi brothers and a Dallas Smith song 'Here Comes The Hurt'. Both tunes are great garage pop with the latter especially cool because of a couple of fuzz guitar rave-ups. 'You're Bad' has a way too short raga guitar solo. Just out of interest Dallas Smith produced this record and he also worked with The Gants.