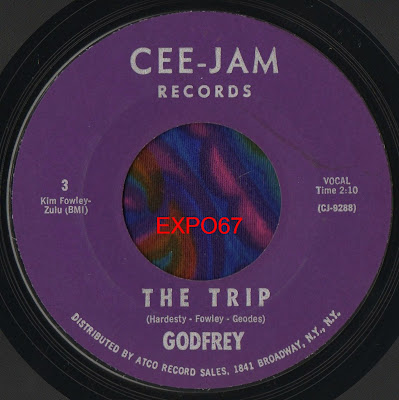 Godfrey was a Los Angeles DJ in the mid 60s at around the time when the Sunset Strip was a happenin' place and he obviously wanted to get some of that hip action in the form of his own record.

'The Trip' is a cover of Kim Fowley's psychedelic rap and it ain't a bad effort sticking very close to the original version. Not sure if this was any kind of hit or anything. It probably didn't sell much outside of L.A.

The flip 'Come On, Come On' is credited to Godfrey's Group presumably his backing band on 'The Trip'. It's a neat instrumental with the inclusion of brass and has that mid 60s soul feel about it.

Cee-Jam Records were short lived and only released a handful of records including 45s by Art Wheeler and Dorsey Burnette.
Godfrey