NOW - Having A Hard Time 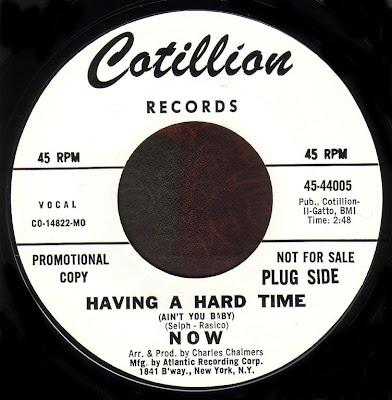 Not to be confused with a band called Now who released 'I Want' on Embassy Records. They went on to become Tripsichord Music Box.
This particular Now were probably a studio outfit.

'Having A Hard Time' / 'Deja Vu' 45 on (Cotillion 44005) was released in 1968 possibly as early as March. Both songs were written by Paul Selph and Tommy Rasico.
Paul Selph was a Memphis WMPS radio DJ.

Mr Flood's Party released a song called 'Deja Vu' also on Cotillion 44017. I've not heard this but it's highly likely a cover version of Now's original.

'Having A Hard Time' was the plug side and is a laid back country folk tune not unlike the sound of Stone Country or even Crosby Stills and Nash.


Divshare is down yet again (surprise, surprise) so have a listen instead to 'Having A Hard Time' This track is slated for Gear! 9