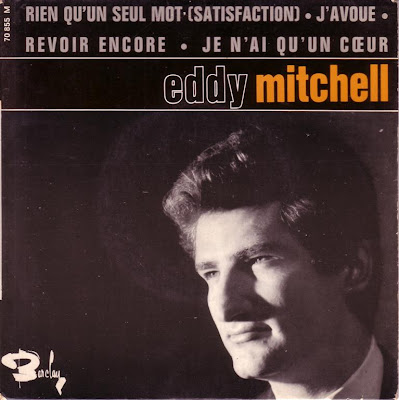 EDDY MITCHELL - Rien Qu'un Seul Mot (Satisfaction) EP (Barclay 70 855 M) 1966
Don't be put off by Eddy Mitchell's 'thunderbird' look because he sure delivers a cracking cover of The Rolling Stones hit 'Satisfaction'. It is probably my favourite cover of this classic. For those not familiar with this guy, he's French and sings in French and looks like a French square.
'Rien Qu'un Seul Mot' (Satisfaction) is full of scorching fuzz with constant clattering tambourine. There's also time to add a powerfull lead guitar break before the fuzz kicks in once more. Eddy's vocals are a treat and I dig it when he throws in some Buddy Holly mannerisms.
His back up band on this EP are billed as The London All Stars. I don't know who they would be. Most likely the best session musicians London had to offer at the time.
The rest of the disc is the more familiar Club/Soul sounds Eddy Mitchell is better known for and not to my particular taste. But I can't argue with his version of 'Satisfaction'.....it's a killer.
EDDY MITCHELL - Rien Qu'un Seul Mot (Satisfaction)